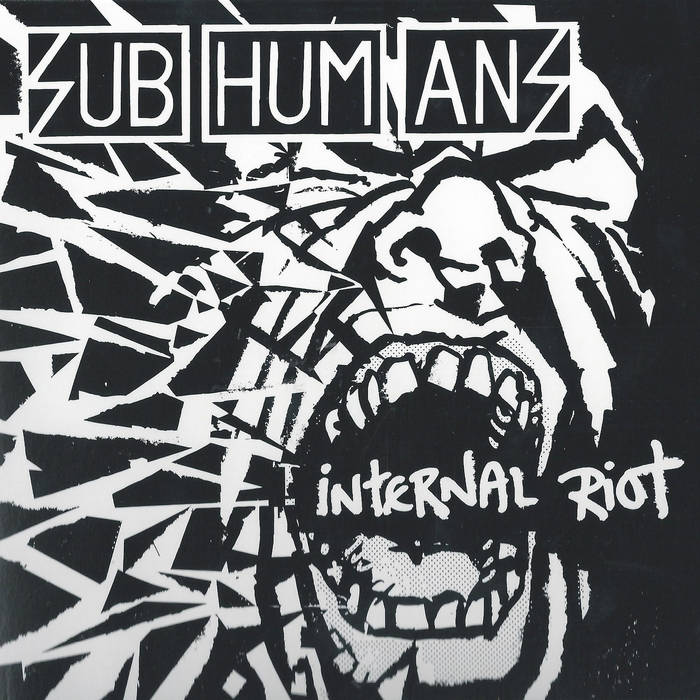 MIKEY T (666) Awesome album this innit guv. I'm probably preaching to the converted here, but if I'm not, get your ears wrapped around this melodic positive thought provoking Subhuman landscape YOU MIGHT NEED THIS 🦊 🤗💞🌳 Favorite track: Never-Ending War Song.

s-bluck seriously, select A track... There are so many great trax on this album.

Liz Their first recording in 20 years and still kicking against the p***ks! Favorite track: This Year's War.

REVIEW from Sputnikmusic.com
It’s been nine years since singer Dick Lucas and the anarchist U.K. punk band The Subhumans reformed for touring, and 20 years since the band released an album of new material. With punk rock all but squandered by the eyeliner-wearing MTV faithful, Internal Riot arrives just in time to remind us what a punk band is supposed to sound like, rather than what they’re supposed to look like.
The screaming jets and guitars in the beginning of “This Year’s War” make it clear that time hasn’t slowed The Subhumans down, as they sound angrier than ever. The moaning guitars and furious drumming sound like the blast of a well-timed bomb. The band delivers 13 songs in 41 minutes without leaving out a single target in Dick Lucas’ raspy assault.
Lucas paints his ugly picture of America with lines like “There’s war in the headlines, there’s war in the heads. The leaders will feed us ‘til we’re overfed.” His stories focus on the atrocities of war and violence, and instead of simply pointing out the problem like too many of the bands releasing political-tinted albums today, Lucas’s lyrics actually point to solutions.
The majority of the band’s social and political tirades discuss guns and bombs, but “Supermarket Forces” attacks the oversized grocery and department stores that impact local businesses. With Lucas screaming, “The price of all your favorite meals stays low, but now you can’t afford it,” one could assume he doesn’t do his shopping at K-mart.
As a whole, the band itself sounds very tight on the album. From the machine gun intro to “Culture Addict” to the simple-yet-effective guitar riffs on the title track, these middle-aged musicians sound like they’re still in their prime.
But the album is not strictly limited to two-minute cuts of punk fury. “Too Fat, Too Thin” showcases the band’s lesser-known ska sound, with a punchy bassline and upstroke guitars in a song that focuses on the media’s constant pressure for women to lose weight. If you would have approached the band in 1983 and told them that one day they’d be the heroes of anorexic teenage girls everywhere, do you think The Subhumans would still be around in 2007?
With a rich history embedded in the roots of punk rock, and a new album that proves that they haven’t lost their grasp on what’s happening in the world, The Subhumans have managed to stay relevant while showing today’s sugar-coated punk bands what’s really going on.

Bandcamp Daily  your guide to the world of Bandcamp

outré black metal, with a Victory Over the Sun interview and music from Liturgy and Jute Gyte.