The Day The Country Died 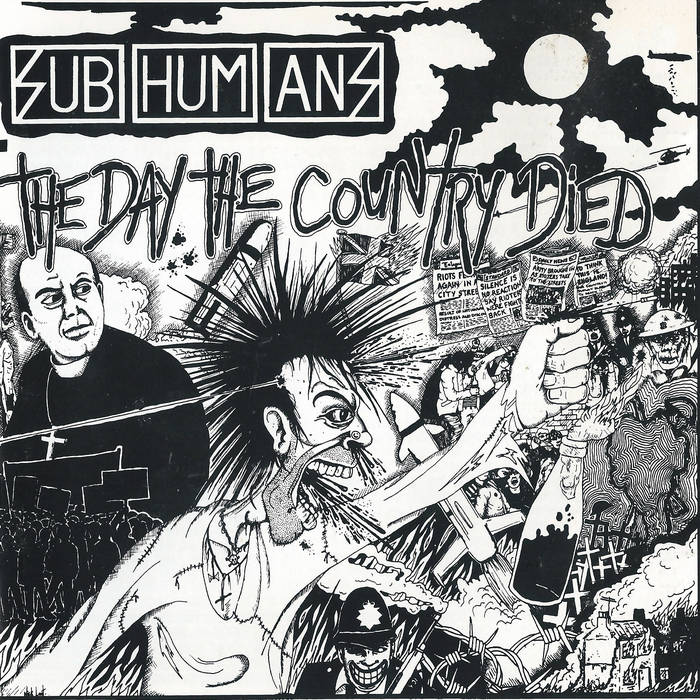 MIKEY T (666) First bought this album when it first came out on Flux Of Pink Indians label Spider Leg decades ago and I played it to death in squats, mates places then lent it someone.....I never saw it again 😁
I was then involved in anarchism quite a lot and buying records was a luxury at the time but I still had a C60 taped copy and amazingly still have it 😲
And now have another taped copy 😁

aliss_blackout_hrt_bandits First punk record I bought at age 13 or 14, in the almost late 80s. Came back to this recently and it moves my young heart more now than ever. Favorite track: Subvert City.

REVIEW from Sputnikmusic.com
There was only one year to go when this record was recorded, and Orwell's paranoid classic work '1984' really informed Dick Lucas' lyrics. Most of the music press are in agreement that The Clash's 'London Calling' or The Sex Pistols 'Never mind the Bollocks here's the...' are the essential punk rock records. This is the same press that declared punk rock a spent force when Sid Vicious shook his mortal coil with a copious heroin dose courtesy of his doting mother. By 1983 The Clash had abandoned their furious punk rock roots, the Sex Pistols had disastrously split and the press was clamouring for the first publication of ''the next big thing''.

However, punk rock was far from over. Once the movement had lost its mainstream popularity, only those who really wanted to be a part of it were left. Gone were Vivienne Westwood’s brilliantly offensive torn t-shirts, now it was more likely an all black uniform with striking symbols of peace and anarchy painted on the garments. The imagery of Crass and Discharge was the uniform of choice. But where was the sense of humour? Although Crass did use a lot of humour to make their points, so many people missed the joke. Where was the sarcasm and wit akin to Jello Biafra for the UK scene?

Allow me to introduce Dick Lucas, with sharp witted lyrics a raspy voice and a furious band The Subhumans, spelled [SUB][HUM][ANS] as many studded leather jackets will tell you. They were not the usual early eighties punk rock band, not quite falling in with the anarcho punks due to their melodic music, nor did they fit in with the Oi! Crowd, as their lyrics detailed more than football, fighting and alcohol.

The lyrics are one of the best things about this record, the well read band wrote very well informed and incisive lyrics, with a wide range of subjects. With subject matter ranging from nuclear war and destruction on a national scale to squat parties, the band has played many squat gigs over the years.

The frightening front cover depicts an anarcho punk being shot through the head amidst a frenzy of oppressive imagery, such as the solemn priest, a policeman with a wicked grin and nuclear missiles flying through the air. This may lead people to believe it will be an equally frightening listen, however, the Subhumans have a keen ear for melody as well as damning riffs. One minute the melody is slow dark and frightening, the next fast paced, righteous and furious. This fits the subject matter perfectly, fast minor chords with anxious lyrics concerning Lucas’ smoking habits one minute, and terrifying warnings of a nuclear holocaust the next.

The record begins with the ominous ambience of an empty wasteland, with the sound of a falling bomb, before the crash however the music begins with muted chords and the unforgettable chorus of “So long to the world, that’s what they said, it’s 1984 and it’s all gone dead”. Each song tears straight into the next, which unusual for early 1980s anarcho records, which often feature television and radio broadcasts between their songs, on this record, the Subhumans make their point just using their lyricism and fast paced punk rock music.

The highlights of the record are “Minority”, “Mickey Mouse Is Dead”, “Subvert City”, “No” and “No More Gigs”.

Minority makes an anxious attack on majority rules, angry that most of societies decisions are made to benefit the majority who don’t even understand the issue. This goes straight into the ‘’Dun dun dun dun’’ guitar intro to ‘’Mickey Mouse Is Dead’’ with Lucas’ angered chant tearing over the top, then the guitars thrash onwards at blistering speed, with lyrics concerning the tampering and over serious explanations of cartoons, this then builds up to the chant of “1 2 3 4 Look what you’ve done to Mickey Mouse” usually the tune of “We don’t want your ***ing war” this is an example of the way Subhumans were a bit too serious for most of the anarcho crowd.

“Subvert City” is the most obvious nod towards Orwell’s 1984 novel. ‘’Borrowing’’ its riff from The Vibrators ‘’Troops Of Tomorrow’’ it is a narrative tale of those who fight for liberty now, will control with fear in the future, set in the midst of a nuclear holocaust, ‘’Subvert City’’ remains one of Subhumans finest moments.

“No” begins with the ever memorable opening line of “No I don’t believe in Jesus Christ, cos my mother dies of cancer when I was five. No I don’t believe in religion, I was forced to go to church when I was five” the common punk rock subject of religion, getting a good hateful once over. The song doesn’t stop there though, continuing to disregard the police, fashion, the system and it’s media. Like a continuation of “Minority” this is written as a response to claims of “It’s not that bad” and “You’ll grow out of it”, something many punks believe they will NEVER do.

“No More Gigs” is the records ultimate statement; it’s a vicious attack on straight society. Angry at peoples apathy towards modern cultural efforts and information, and their willingness to conform to the whims of the music press “all their money wasted, on David Bowie LPs”.

Although a David Bowie record would not be an unwise purchase, this record is truly one of the best punk rock records of all time, and doesn’t deserve to be ignored or forgotten.

Bandcamp Daily  your guide to the world of Bandcamp

outré black metal, with a Victory Over the Sun interview and music from Liturgy and Jute Gyte.